International migrations are increasingly taking shape as phenomena characterized by transnational aspects that create strong links between different territories and cultures, especially in urban areas. From these considerations, the idea was developed in 2010 to promote a form of responsible zero-mile tourism that has as its protagonists fellow citizens who have experienced migration in their biographies or family history. 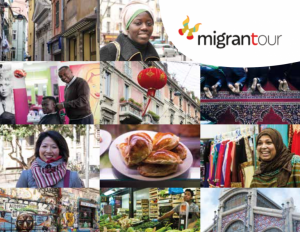 This intention began to materialize when, thanks to the program “Agrobiodiversity, cultures and local development,” financed by IFAD (International Fund for Agricultural Development) and promoted by Oxfam Italy together with ACRA, the first course for “intercultural companions” was held in Turin, promoted by the Viaggi Solidali cooperative, a responsible tourism tour operator that had first matured this proposal. Since 2010, thousands of people have participated in these walks: school students of all levels, curious citizens, foreign tourists, neighborhood residents, groups and associations. Given the interest and success of this first phase, and the multiplication of similar experiences in other cities, ACRA, Viaggi Solidali and Oxfam Italia have promoted the development of the European Migrantour network, an initiative that allows people to discover neighborhoods, squares, markets, places of worship, associations and stores through the words of intercultural escorts.

The project “MygranTour: a European network of migrant-driven intercultural routes to understand cultural diversity,” co-funded by the European Union, launched in December 2013 and concluded in July 2015, was promoted by ACRA Foundation, Viaggi Solidali, Oxfam Italia, Marco Polo, Bastina Voyages, Periferies del Mon, IMVF, Renovar a Mouraria, and Earth. The intervention aimed to foster the integration of citizens of foreign origin in the involved cities by promoting mutual understanding and respect. The protagonism of migrant citizens was the key to the success of the initiative, which involved 5 Italian cities (Turin, Milan, Genoa, Florence and Rome) and 4 European ones (Marseille, Paris, Valencia, Lisbon).