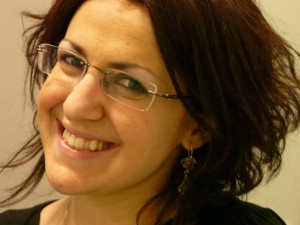 My name is Paola and I am Italian, born and bred in Turin but of southern origins: Calabrian (Catona-Reggio Calabria) on my mother’s side; and Apulian (Ordona-Foggia) on my father’s side. I believe it was down to my Mediterranean roots and the fact of being “second generation” myself that I became interested in the phenomenon of migration, and the issues, but also the value connected with it. I graduated in Arab Studies in the Faculty of Languages and Foreign Literature in Turin, continuing on my studies in Islamic Studies in the Faculty of Religious Sciences, still in Turin. For almost 10 years now, I have been an Italian teacher for foreigners, mostly Arabic speakers, and for a few years an Arabic teacher for Italians. I have worked a long time in the world of intercultural and community co-operation, founding an Italo-Algerian voluntary organisation called JAWHARA in 2008 and a gallery of art and craft from the Maghreb called TIZIRI in 2012. As such, the Arab-Islamic world and interculturality have become the “bread and butter” of my studies, my work and my private life. As the name of my organisation says, “the other” is “a diamond”, a precious thing to be appreciated simply for its being human!