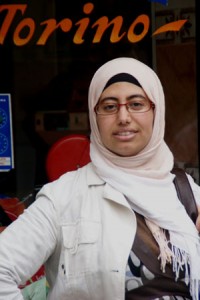 My name is Essediya and I was born in El Jadida in Morocco. I’ve been living in Italy since 2002. I am married with two children and I have a great passion for baking. I graduated from a secondary school specializing in hospitality in Morocco. There I learned how to prepare a bit of everything of Moroccan cuisine and, as the school was French, also some French recipes. My specialities are desserts of all kinds, from ghribia biscuits (with coconut) to fakkas (made from flour, almonds, fennel and sesame seeds). I live in the Porta Palazzo neighbourhood where I do all my shopping and know many people. I enrolled on the intercultural companions course because I was looking for a job but also a way of changing the mentality of people and the way unfortunately they often look at us Moroccans and Arabs, in general. The course also was very interesting because it enabled me to get to know other cultures and people arriving from other continents and countries.