Catania has been involved in immigration flows which, after the seventies, have flocked to the cities of Mediterranean Europe and which are parallel to an exodus of local labor force towards more dynamic labor markets. To date, the city has about 13,000 foreign residents, equal to 4% of the population. The five largest settling nationalities are Sri Lankan (about 18.9% of total foreign residents), Rumanian (16.4%), Chinese (9, 4%), the Mauritian (8.9%), the Bengali (6.8%). Do not underestimate the residents from Senegal and Morocco, communities particularly rooted in the territory of Catania. The high concentration of foreign citizens in Catania means that about seventeen are employed by non-Italian citizens. In the metropolitan area of ​​Catania, the effects of the employment deficit that characterizes the south are mitigated by the opportunities offered by a relatively lively and dynamic economy. 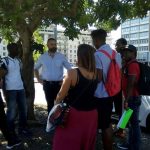 San Berillo / Fiera and Civita
The walk begins at Palazzo De Gaetani, home to Trame di Quartiere, in the heart of the San Berillo neighborhood. The route develops from the area adjacent to the Fera ‘o Luni  (historic market of Catania, the workplace of many foreign residents), in the streets that belong to the gutted part of San Berillo (almost all the neighborhood was demolished at the end of the years ’50 to build the current Corso Sicilia and Corso Martiri della Libertà), until you reach the nearby Civita, equally ancient district, residence of nobles and fishermen, where there are the Mercy Mosque, the port, and the noble palaces after the reconstruction of Catania after the earthquake of 1693. We then return to San Berillo, where we can see evidence of the considerable concentration of foreign population introducing us into the spaces of daily life of the Senegalese community, including homes and small businesses. After a short walk through the streets of the neighborhood the itinerary ends a few meters from Palazzo De Gaetani, in via Maraffino, where you can admire a recent mural depicting Berillo di Antiochia, the saint who gives the name to the neighborhood.