Take part in the Cosmopolitan Experience within Brussels, the second most cosmopolitan city in the world

“Take part in the Cosmopolitan Experience within Brussels, the second most cosmopolitan city in the world” There are so many possibilities to discover the multiculturality and the diversity existing within Brussels. Beginning with the Flemish and Walloons follow by immigrants from the neighbouring countries, and since the 19 century, from all over the world, Brussels has many to offer in term of diversity and is home of groups of people coming from more than 183 different countries. It is the world’s second most cosmopolitan city after Dubai! Each group having its own background deeply linked to the history of migratory waves. Brussels is rich of the cultural abundances coming from all sides of the world. Our tours are meant to be an opportunity to learn about different places of the world within the city and thanks to its inhabitants. Discovering Brussels is a permanent trip from heritages and history to the exchanges with the Brussels people 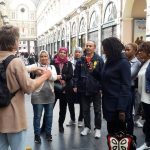 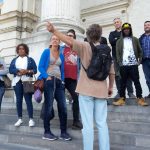 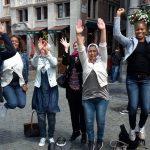 Matongé – Kinshasa mon amour
Our first itinerary, Matongé – Kinshasa mon amour, starts at the Patrice Lumumba square following the steps of the sub-saharian migrants, their history, their past and contemporary struggles and their amazing creativity. This tours offer the opportunity to travel past and forward from the history of Belgian colonisation in Central Africa to today’s Matongé’s neighbourhood. From the African student house to the Kumba’s cultural association passing through traditional shops, handicrafts, artistic galleries and typical eatery, our Matongé tour is a true experience of the cultural diversity and richness of Brussels’ city.